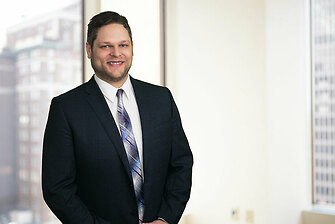 Aaron’s practice focuses on patent litigation and counseling, with an emphasis on the life sciences and biotechnology. His experience includes matters before the federal courts and the United States International Trade Commission. Aaron leverages his scientific background to assist clients with biosimilars proceedings, litigation under the Hatch-Waxman Act, and advocacy before the Food and Drug Administration.

Prior to joining the firm, Aaron was a tenured professor in Peru where he oversaw the design and construction the first genomic sequencing facility in the country. He also supervised the parallel development of a gene bank for large-scale cryogenic preservation of native genetic resources. Aaron’s doctoral research explored within-species genetic variation in the bird genus Tangara, focusing on the influence of biogeography. At the time, he was a Research Associate at the Field Museum’s Pritzker Laboratory for Molecular Systematics and Evolution.

Aaron was a summer associate with Axinn in 2019. He graduated with honors from Emory University. Aaron earned his PhD and master’s degrees from the University of Chicago. There, Aaron received a Graduate Research Fellowship from the National Science Foundation for three years beginning in March 2008. He was also awarded a Hinds Fund Research Grant from the University of Chicago in June 2008. He holds a BA in Biology from Earlham College.