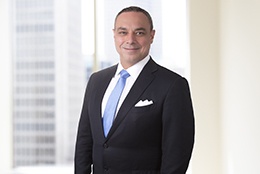 Paul Zeineddin has litigated over sixty patent infringement cases in district courts and the International Trade Commission (ITC), fourteen of which proceeded to trial and eight others resolved by dispositive motions. Paul has also worked on some of the largest global 2G, 3G, and 4G standard-essential patent (SEP) disputes in the Netherlands, the UK, Germany, and China. Paul has also arbitrated the Fair, Reasonable, and Nondiscriminatory (FRAND) aspects of large SEP portfolios, including acting as lead counsel for one of the world’s largest consumer-electronics and wireless-communications companies.

In devising litigation and trial strategy, Paul also draws on seven years of in-house international licensing experience of large patent portfolios in bilateral and collective settings. Paul’s graduate research in Electrical Engineering and work experience in communication technologies allow him to delve into the scientific and business parts of the case and seamlessly bridge the gap between the technical issues and the ultimate economic value in question.

Before embarking on his legal career, Paul was a Senior Engineer at the MITRE Corporation and British Telecom, where he designed over ten national and international Wide Area Networks (WANs). His graduate research centered on quantum mechanics, optoelectronics, and computational electromagnetics, and was published in acclaimed, international peer-reviewed journals.